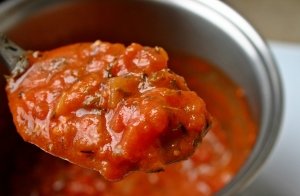 If a passata is the base for man Italian dishes, a sofrito is the base sauce for many dishes in Spain, South America, and Latin America.

A sofrito is a mixture of lightly-fried garlic and onion, usually made with tomatoes and other vegetables. It is often used to make soups and stews, but it is also ideal for cooking meat.

Many Latin American countries have added aromatic herbs and spices to the basic sofrito sauce. In Colombia, cumin and coriander is often added, in Cuba, they add white wine, cumin, and a bay leaf, while a Dominican sofrito contains oregano, red onions, and apple cider vinegar.

Here are three recipes where you can use sofrito:

A jar of sofrito casero espaciado

Half a tablespoon of Oleovilla olive oil

One cup of water

Salt and pepper to taste

Heat the oil in a large cast iron pan over a medium heat and cook the Spring onions, red pepper, and tomatoes for a couple of minutes.  Add the sofrito casero espaciado, salt, and cumin and mix well. Remove from the heat and put the mixture to one side. Season the chicken with garlic powder and brown in the same pan.  Add in the sofrito mixture, then add the beer, water, and coriander. Cover the pan and simmer on a low heat for 30 minutes or until chicken is thoroughly cooked. Serve with rice.

One Ibérico salami, chopped and with the case removed

Half an onion, diced

A jar of sofrito casero

A splash of olive oil

Salt and pepper to taste

A pinch of oregano

Gently fry the chopped salami, onion, and garlic in a soup pan for five minutes. Add the sofrito and turn down the heat. Then, add the potatoes, the cup of chicken stock and water. Stir, then add the olives, season with the sale, pepper, and oregano. Simmer for 25 minutes, then add the noodles and simmer for five or six minutes more.

A splash of milk

A splash of sofrito casero

Melt the coconut oil in a large pan over a medium heat.

Whisk the eggs and milk together in a small bowl, then add to the hot pan.

Scramble the eggs with a spatula. As they come together, add the sofrito. Continue scrambling the eggs and sofrito together until the eggs are cooked.

Serve the eggs with the toast, the sliced avocado and fresh coriander.

Take a look at what else is on offer in our online store.

Want to join the discussion?
Feel free to contribute!

Which Spanish foods and drinks will you fall in love with this Valentine’s...

Here is our menu inspired by amazing Andalusia
Scroll to top